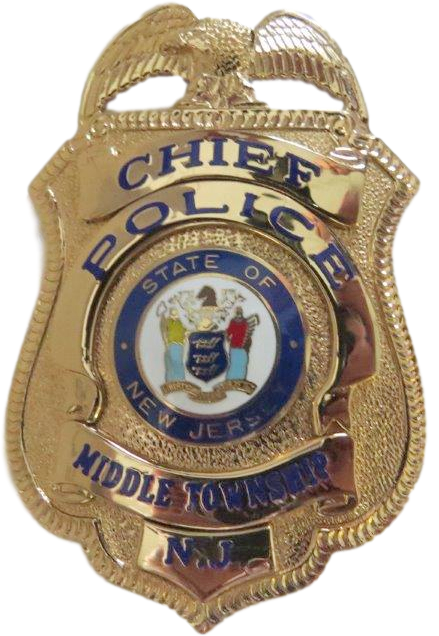 Chief Christopher M. Leusner started his career in law enforcement in May 1997 with the Wildwood Police Department as a Special Class II Police Officer. In September of 1997 Chief Leusner was hired by the Middle Township Police Department as a full time Police Officer. In February of 2000 he became a member of the Township SWAT Team where he served for the next nine years with last five last years as a SWAT leader and then Commander of the Cape May County Regional SWAT Team. In February of 2003 he was promoted to Sergeant and served on a Patrol Squad for the next three years. In February 2006 he was promoted to Lieutenant and supervised the Major Crimes Unit, Communications Division, and conducted Internal Affairs Investigations.​

In October 2009 he was promoted to Chief of Police after an interview process that involved three separate interviews with two groups of citizens, Township Committee and a written project on the future of the Middle Township Police Department. Chief Leusner is a graduate of Middle Township High School, Gloucester County College, Saint Leo University and holds a Master’s Degree from Farleigh Dickinson University in Administrative Science with a Certificate in Law and Public Safety Leadership. He graduated from the FBI National Academy, Session 234 in Quantico, VA and graduated from the New Jersey State Chiefs of Police West Point Command and Leadership School. Chief Leusner is a graduate of the Certified Public Managers Program and is currently certified as Accredited Chief Executive-Advanced through the New Jersey Association of Chiefs of Police. Chief Leusner was a leadership exchange fellow at the College of Policing in United Kingdom in the Fall of 2014 and at the same time served as State President of the FBI National Academy New Jersey Chapter. Chief Leusner has taught various Criminal Justice courses at Atlantic Cape Community College as Senior Adjunct Professor.