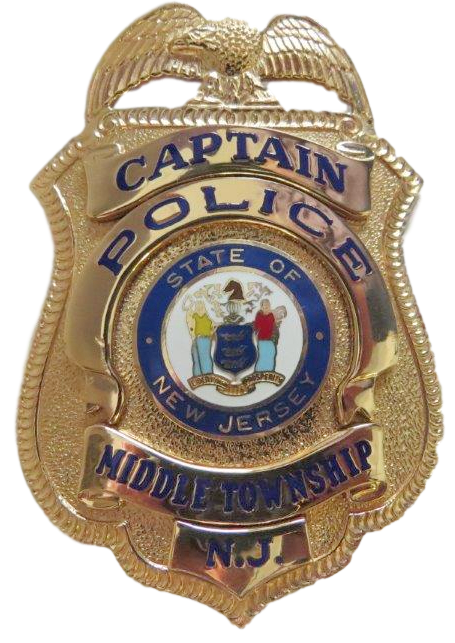 Captain William Adams started his law enforcement career with the Delaware River and Bay Authority in February 1997. He attended the class held by the Delaware River and Bay Authority Police Academy where he received police training for the states of New Jersey and Delaware. Captain Adams worked at the Delaware Memorial Bridge for about 8 months before being transferred to the Cape May Lewes Ferry Terminal in North Cape May. In August of 1999, Captain Adams was hired by the Middle Township Police Department. He attended the Cape May County Police Academy as a Waiver. In February 2006, he was promoted to Sergeant and was in charge of the Alpha Squad in the patrol division. In November 2011 Captain Adams was promoted to his current position and is the Patrol Commander. His duties include purchasing patrol equipment, scheduling shifts and training, FTO Coordinator, Domestic Violence coordinator and other various duties.

During Captain Adams’ law enforcement career, he has been a member of the Middle Township SWAT Team since 2002, and is currently a Team Leader for the Mainland Division of the Cape May County Regional SWAT Team which formed in 2006. In 2005, Captain Adams became the department’s first Drug Recognition Expert. The training he received, allows him to do further testing on subjects suspected of driving under the influence of drugs. Captain Adams is a former instructor of the New Jersey Criminal Code and Survival Training at the Cape May County Police Academy. Captain Adams was also a Field Training Officer prior to being promoted to Sergeant. Captain Adams is currently the accreditation manager for the department, which entails keeping the department up to date with policies and procedures. There are 112 standards set by the New Jersey Law Enforcement Accreditation Commission with which the department needs to comply. These standards are considered the “best practices” of law enforcement.

Captain Adams is a graduate of the Middle Township High School class of 1990. Captain Adams has a Bachelor of Arts Degree in Pre-Law from the Pennsylvania State University (1994). Captain Adams’ supervision training includes Police Supervision, Certified Public Manager, SWAT Supervision and Command Decision Making and he is currently enrolled in Command and Leadership program sponsored by the New Jersey Chiefs of Police Association.